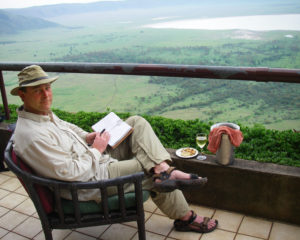 In addition to working as a Certified Financial Planner®, David Mauro writes for Adventures Northwest magazine and blogs extensively on topics ranging from mountain climbing to why sardines are safe. In the course of his acting career David has appeared in several commercials for television, the internet, print and radio. In one recent TV commercial he represented a large chain of carpet stores and as a result is now better known for hawking carpet than for summiting Mt Everest. Sigh.

David is an improv alumni of The Upfront Theatre, frequent consumer of emergency room services, and builder of dubious water craft. More than anything he would like us all to do more listening; listening to each other and listening to that quiet voice that tries to guide our lives. The father of two sons (Trevor, living in Seattle, and Chase, living in Beijing), David resides in Bellingham, Washington with Rocky “The Wonder Dog” and Lin Lehn …to whom he is permanently engaged.